This months Orkus Magazine gets to know Brocarde in an exclusive interview. For those who don’t speak German, the English translation is below:

Unorthodox, that’s the appropriate adjective for Brocarde anyway. The bustling artist is a fashion designer, creating jewelry, and now she has a passion for her that has been slumbering in her for a long time, just waiting to get out of the dark into the light: she makes music. We recently presented her debut single Last Supper. It has harmony with the outside and the inside and is an expression of individuality, using fashion as a protective shield and the explores reversal of the food chain.

“Sometimes turning the table highlights how twisted reality actually is.”

Orkus: Clothing is more than just something necessary to cover. It’s a way to express yourself. What kind of outfits make you feel secure?

Brocarde: I like to leave a lot to the imagination as I prefer to connect using my eyes. I have an old soul, I’m obsessed with vintage clothing, the exaggerated shoulders, nipped waists and extravagant fabrics. I would have revelled in the Victorian era, it’s a big inspiration for my own designs. Ultimately, I feel most secure in my own clothing as it’s focused around everything I love and I adore the fact that it features my poems and lyrics, it makes me feel like I’m literally wearing my heart on sleeve.

Orkus: In what clothes do you feel uncomfortable?

Brocarde: I believe in the sense of occasion, so I love to dress up. I feel uncomfortable dressing down and being casual. I think clothing, like make-up, can be your armour and can either empower you or leave you feeling vulnerable.
Once you made your own jewellery which became a commercial success. But you also wrote that with the time it lost its heart. Nevertheless I think it must be a very difficult decision to break up with it, isn’t it?
Sometimes you have to let things go in order to move forward. It was very difficult and it created an internal battle between my head and heart. Success is hard to let go because it’s so hard to achieve, but when your heart’s no longer in something you begin to make decisions that you can’t justify and that became a problem for me.   Orkus: Did your love for clothing and music influence each other in a certain way?

Brocarde: Absolutely, I see the two worlds almost as one. Even when I start to write a song, I see how the video will unfold and imagine what I will be wearing. The boundaries between the two things are forever blurred, that’s why presenting a clothing collection in conjunction with a single release felt natural to me.

Orkus: We recently presented your debut single and video Last Supper. Why should Brocarde’s first musical sign of life be with this song?

Brocarde: Starting a music career with a video that depicts your demise is an unorthodox decision, but in many ways it feels symbolic of my re-birth. It’s an indulgent journey into my darkest frustrations and it feels like an opportunity to get everything off my chest before embarking on the next chapter.

Orkus: What inspired you to this song?

Brocarde: The song tackles a lot of not only personal but cultural issues. As an emerging artist people like to make comparisons, who do you sound like? who do you look like? It’s like an endless battle, when all you want to do is be is yourself, you have to be singular in your vision and fight hard so you don’t evolve into someone else’s fantasy. Last Supper tackles everything I find disturbing about popular culture and consumerism. Generally as a society we have come to accept things as “normal” when if you look a little deeper the cracks start to show.
Orkus: I think you can watch the video clip very often and always discover something new in it. For example, I find it very interesting how the food chain is changed, in the end you are eaten by pigs. What do you think about that? What message do you want to show with the song?

Brocarde: I love that you noticed that. The video has lots of layers, lots of sub- plots and underlying narratives that feed (no pun intended) off of the main storyline. It’s all down to how deeply the viewer wants to delve. Sometimes turning the table highlights how twisted reality actually is.

Orkus: How did you experience the shoot?

Brocarde: I have a dark imagination, and a peculiar sense of humour so the shoot was a process of bringing everything out of my mind and turning it into a little horror movie. Turning my vision into reality was challenging and being more than just the artist meant I had many roles to transition between.

Orkus: If you have to die tomorrow: What will be your last supper?

Brocarde: I feel like my imagination is leaning towards a metaphorical Last Supper rather than a physical one. I’d definitely want to have my cake and eat it!

Orkus: What about your future plans? When can we look forward to your debut album?

Brocarde: The exciting thing for me is knowing that this is just the beginning, I have written so many songs that I’m immensely proud of, sharing them with the world is the nerve wracking part as it’s like serving your soul on a platter and waiting for someone to take a bite. 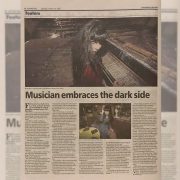 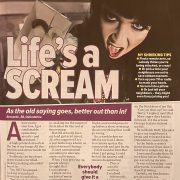 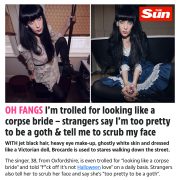 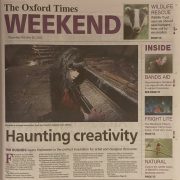